Create an Account - Increase your productivity, customize your experience, and engage in information you care about.

The City of Cloverdale has initiated the preparation of a Local Hazard Mitigation Plan (LHMP) and an update to its General Plan Health and Safety Element. The dual effort addresses associated Federal and State requirements to identify risks and vulnerabilities associated with natural disasters and to develop long-term strategies for protecting people and property from future hazard events. The Federal Disaster Mitigation Act of 2000 (DMA 2000) requires that states review LHMPs as part of their state hazard mitigation planning process. The intent is three‐fold:

State law encourages local governments to cross-link their hazard mitigation plans with their general plans, in part to maintain funding eligibility for State funding programs. The City of Cloverdale has decided to address these State and Federal requirements simultaneously with a joint LHMP/Safety Element process that the City kicked-off in late 2019.

The State of California has long recognized the need for local governments to conduct their planning with an awareness of hazards that could affect the people and property within their jurisdiction. Accordingly, State Planning Law requires that all local government general plans include “safety elements” that include documentation of such hazards and goals, policies, and programs to protect against their consequences. Following the institution of Federal requirements for the preparation of mitigation plans, the California legislature established a series of requirements to strengthen the linkage between safety elements. This includes substantive requirements that are triggered by the preparation or update of a mitigation plan, most recently through Senate Bill 379, which requires safety elements to include climate adaptation and resiliency content, including a vulnerability assessment, adaptation and resilience goals, policies, and objectives, and feasible implementation measures.

Mitigation is one phase in the four-phase emergency management cycle, as depicted in the graphic and described in the table that follows. As indicated, the phases in the cycle, Mitigation, Preparedness, Response, and Recovery occur at various times relative to the occurrence of hazardous events or emergencies. 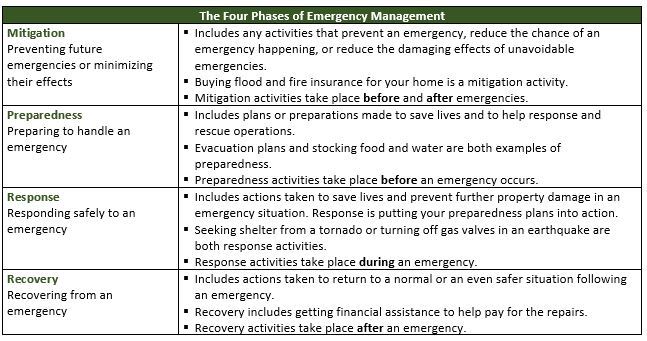 The City and its consultants are working on the Local Hazard Mitigation Plan in conformance with FEMA’s four-phase mitigation planning framework, as depicted below: 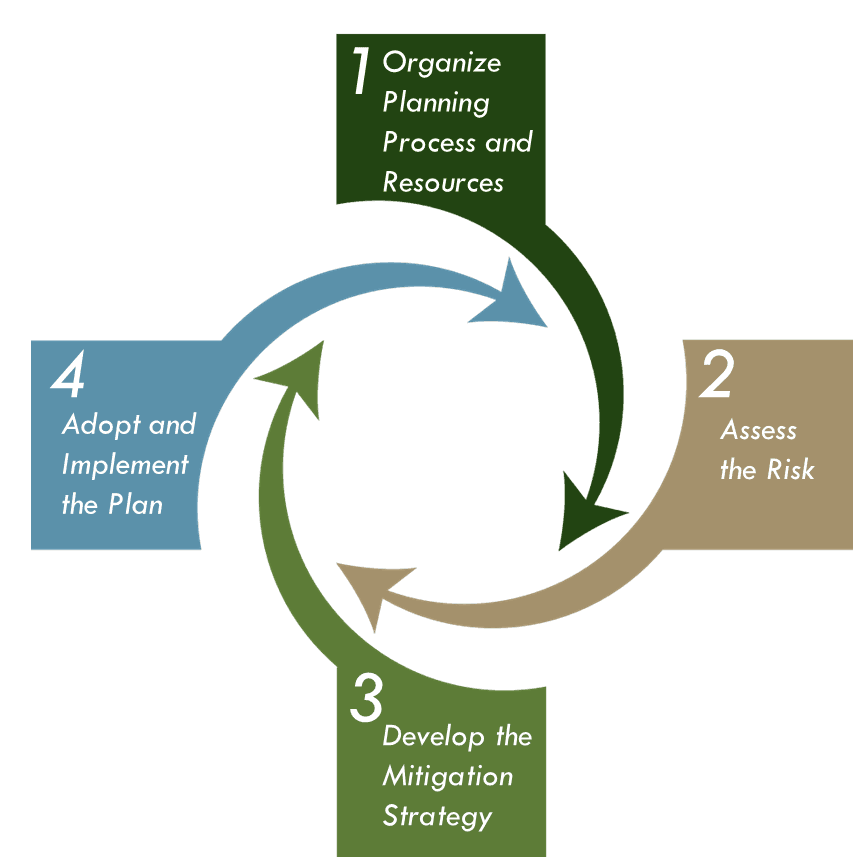 The City has adapted this process to ensure that the process allows for simultaneous preparation of the Hazard Mitigation Plan, which responds to federal statutes, and the City’s General Plan Public Health and Safety Element, which responds to State of California legal requirements. The City’s Work Program is structured as follows to address the combined federal and state mandates:

An essential aspect of the hazard mitigation planning process is consultation with the community, including residents, business interests, local government representatives, and other stakeholders with an interest in emergency management. In Cloverdale, this consultation is taking several forms. First, the City of Cloverdale has committed key staff to participating in an Internal Technical Committee to work with the City’s consultants to provide insight and resources throughout the planning process. Second, the City has formed a Hazard Mitigation Planning Committee (HMPC) consisting of City representatives and, in accordance with state and federal requirements, representatives from local, state, federal agencies, and departments with significant interests in the community and/or mitigation. The HMPC will meet several times during the planning process to contribute to development of the LHMP. Third, the City is providing a variety of opportunities for the public to participate in the planning process. This includes participation in a Community Survey (see separate item below) to help focus the City and its consultants on the most important community priorities. It will also include opportunities to review the hazard identification and risk assessment assembled for the LHMP and to comment on the LHMP prior to adoption. Finally, the Planning Commission and the City Council will participate in the review and adoption of the LHMP and the General Plan Health and Safety Element. And, as always, the public and key stakeholders will have a chance to participate in Council and Commission deliberations through the public hearing process.

The City of Cloverdale wants your opinion about hazards in the area and what the City and its residents should do to minimize the risk of injury or damage to property from future hazard events (such as wildfires, floods, and earthquakes). The information you provide will help us identify and coordinate projects to be identified in a Local Hazard Mitigation Plan (LHMP) that the City is preparing. The survey should take approximately 5 to 10 minutes to complete, and your personal information and responses will be kept confidential. The results of the survey will be included in the LHMP and will be posted on the project website (www.mitigatehazards.com/cloverdale/) and the Public Works page on the City’s website (http://www.cloverdale.net/437/Cloverdale-Local-Hazard-Mitigation-Plan). The survey has been posted in both English and Spanish and is accessible via the following links and QR codes (which can be scanned on a phone or tablet). The survey will remain active through the end of July 2020.

At any given point in time, the City may be involved in activities related to one or more of the four phases in the emergency management cycle. On Friday, February 28, 2020, the City of Cloverdale held a Public Workshop on the Resilient Cloverdale Initiative for Emergency Preparedness. As suggested by its name, the focus of the workshop was on preparedness. In recognition of the essential linkages between preparedness and mitigation planning, and understanding the benefit of describing the linkages to the workshop participants, the City invited Lagomarsino Planning + Management to provide a Presentation on the City of Cloverdale’s Local Hazard Mitigation Planning Process. A copy of the presentation can be viewed by clicking the link. 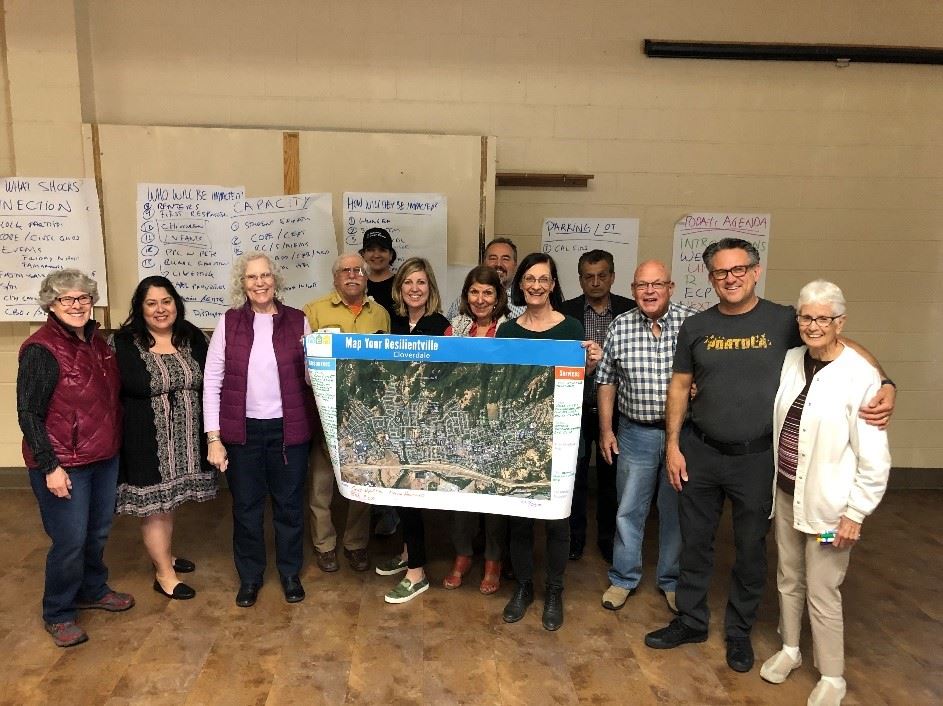 Next Steps in the Hazard Mitigation Planning Process

This chapter describes potential hazards specific to Cloverdale and relates these hazards to human health and safety. These hazards include drought, earthquake, flooding, geological hazards, health epidemics or pandemics, and wildfire, as described in the City’s Local Hazard Mitigation Plan. The chapter also hazardous materials and transportation-related safety concerns.